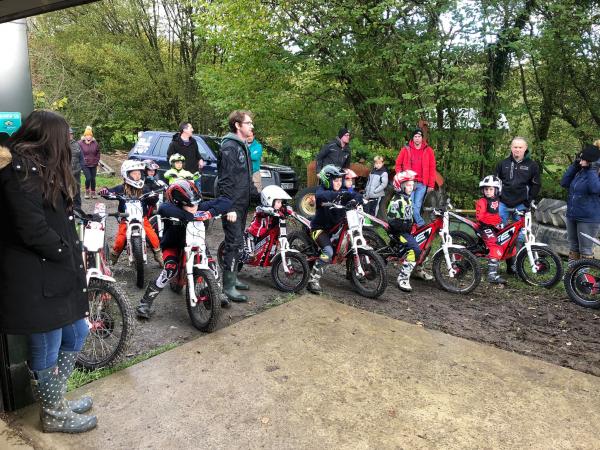 On the 6th of November, Trials Training Wales hosted the 3rd and final round of the South and West
Wales OSET Cup Championship. As per the two previous rounds the venue was Trydan Off Road
Centre, Cenarth, West Wales. Sections were set in 5 acres of thick woodland comprising of streams,
banks, brooks and a separate grass paddock area. With the land being used by
www.trydanoffroad.com for OSET trial experiences and training, there was plenty of scope to set
sections for all abilities.
The trial consisted of 4 laps of 8 sections; 6 set in the 5 acres of woodland, with 2 sections in the
paddock, 1 of which was a man made arena type section and the other snaking along a steep, greasy
bank. There were routes to cater for all abilities; beginner(white), medium(yellow), hard(red) and
elite(blue).
The concluding round 3 proved to be the most challenging. After weeks of torrential Welsh rain and
wind (Thankfully narrowly missed on the day), the 19 riders aboard their electric powered machines
were faced with ‘character forming conditions’; thick mud, wet leaves, some deep pools and the
dreaded slippery banks - especially tricky for the smaller wheeled bikes.
The championship was scored in terms of wheel size along with the ACU youth E, D, C age classes.
Small wheel being the 12.5, medium wheel being the 16 and big wheel being the 20/24.
Starting with the blue/elite route – The blue route was aimed at the more experienced confident
riders, consisting of tight turns, steep slippery climbs/descents, large logs and some deep muddy
brooks; enough to test the most able of riders. Sadly, as per the 2 previous rounds, Finley Samuel,
Youth D, aboard his 20 inch machine was the only rider to tackle the toughest route. With only
himself to battle against Finley finished on a commendable 19marks, 10 of which on the tricky
section 5. Although he was the only rider on route, he was reminded to finish first, first you must
finish. After observing the quality of riding over the championship and practice throughout the
winter months I’m sure we will see more talented young riders stepping up and challenging Finley
for the top step of the blue route championship next year.
Next was the red/hard route – The red route consisted of some tight turns, hills, logs and again some
deep muddy brooks, sections again which will take marks from the most competent riders.
Taking the top step for the youth C class hard route in round 3 and the championship was Osian
Curtis. Osian had a storming round 2 only dropping 2 marks all day. With similar sections set for
round 3, the severity of the adverse weather was clearly visible with talented Osian dropping 10
marks. A mega ride from the young man, a contender for the blue route next year!?!?
Red/hard route – Youth D 16 wheel. A fantastic, confident looking ride from Rhodri Jones on his Oset
16. Rhodri is relatively new to trials and started the championship on the medium route in round 1.
With lots of practice and training over the summer Rhodri decided to step up to the hard route for
round 2 and the final round 3. The bold decision was enough to earn him first place on the 16,
dropping only 17 marks. And overall Youth D red route championship winner. Keep up the hard
work!
With 12 riders, the most contested route of the championship was the yellow/medium route. This
route was made of slight gradients, turns, slippery wet leaves, small logs and of course – lots of mud!
Youth C - aboard his OSET 20r was Jake Thornton. Jake finished round 3 on an impressive 3 marks,
considering the worsened conditions at round 3 this was a vast improvement on the 9 marks
dropped at round 2. Taking the youth C medium route, and the championship win.
Youth D, medium route 20 inch wheel - the most contested class.
Taking the round 3 win, dropping only 1 mark was the ever-improving and confident Scarlett Collins.
Scarlett was put under pressure by Maisie Morris, only dropping 2 marks at round 3. Maisie moved
onto the OSET halfway through the championship, which makes her 2nd place result even more
impressive. Completing the top 3 for the route was Finnley Crowley dropping just 4 marks. Its
Finnleys first year of trials, and this was a particularly good result considering Finnley had stepped up
from easy to medium route in round 3, and now had a 20inch bike instead of the 16. Completing
round 3 in 4th 5th respectively was Teddy Evans and Ava Jenkins, both finishing on 6 marks. Ava was
just pipped to 4th place by Teddy who managed most cleans on the day. In 6th place was Fern
Edwards. Dropping only 4 marks over 7 sections, section 4 seemed to be Ferns nemesis dropping a
costly 14 marks.
It was pleasing to see an all girls top 3 for the championship in this route, showing the popularity of
trials amongst ladies and girls, do we have the next Emma Bristow? The championship concluded
with Scarlett taking the top step, followed by Maisie and Fern taking 2nd and 3rd respectively.
Yellow/medium route – Youth D medium wheel/16 inch wheel. 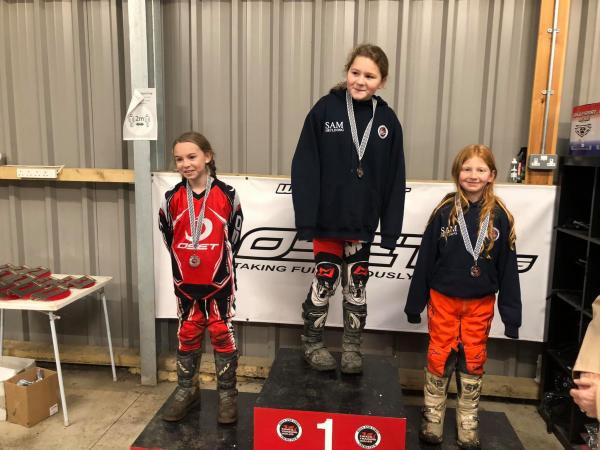 The youth D medium wheel 16inch was contested by Braxton Collins and Nicholas Tudor.
Skillful riding and good throttle control meant Braxton dropped only 6 marks, taking the win from the
ever determined and improving Nicholas Tudor. Like his sister Scarlett, Braxton took the
championship win making it 2 x 1st places for the siblings, a good day for ‘Team Collins’. A solid 2nd
place for Nicholas Tudor, who rode his Oset 16 extremely well in tough conditions, not particularly
suited to the smaller wheel. Lots of cleans, but some slippery banks cost Nicholas marks.
Yellow/medium route – Youth E 16inch wheel. The result we have all been waiting to see. Harlo
Chapman vs Freddie Green. Two super talented 5 year old kids aboard their 16 inch machines, great
friends, but rivals when it comes to trials. With Harlo taking the win in round 1 and Freddie taking
the win in round 2 it was all to ride for at the final round! As expected both riders were pushing each
other throughout the day. In tough conditions Harlo finished on a very impressive 3 marks. Freddie
fought hard, dropping only 2 marks, but 2 unfortunate 5s on a slippery section 1 proved costly.
Big congratulations to these two stars of the future on a fantastic championship, but more important
than the result was seeing them smile throughout the day, having fun.
Next was the white route, a route aimed at beginner riders. The white route was held mainly on flat
ground, with some nice sweeping turns and small logs, sections designed to gently ease the youth
into the wonderful, crazy world of trials.
Taking the win in the Youth C 20inch wheel was Trystan Evans. Dropping only 8 marks in round 3 was
enough to give Trystan the top spot, taking the C class easy route championship. With 3 solid scores
on the easy route, I’m sure we will see Trystan challenging himself and his competitors on a more
demanding route next year!
Youth D 20inch saw a battle take place between Kailo Edwards and Oscar Healy.
Round 3 saw Oscar Healy take the win dropping only 7 marks to Kailo’s 12 marks. Magnificent rides
from both, in what was challenging conditions. However, it was Kailo who was triumphant in the
championship, narrowly pipping Oscar to the top step!
The youth D 16inch easy route was contested by Finnley Crowley in Round 1 and Round 2, however
in round 3 he had moved onto a 20inch machine. Despite this Finnley Crowley was still the 16inch
wheel OSET easy route champion. Congratulations!
Last, but by no means least was the youth E easy route. Young Harper Oliver, as smooth as ever
competently piloted her OSET 16 to victory, taking round 3 win, earning her the youth E easy route
championship. 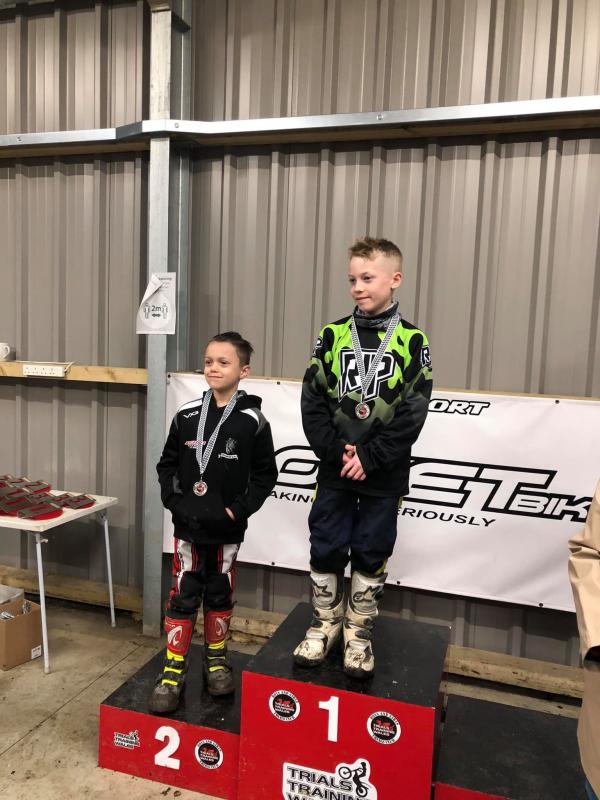 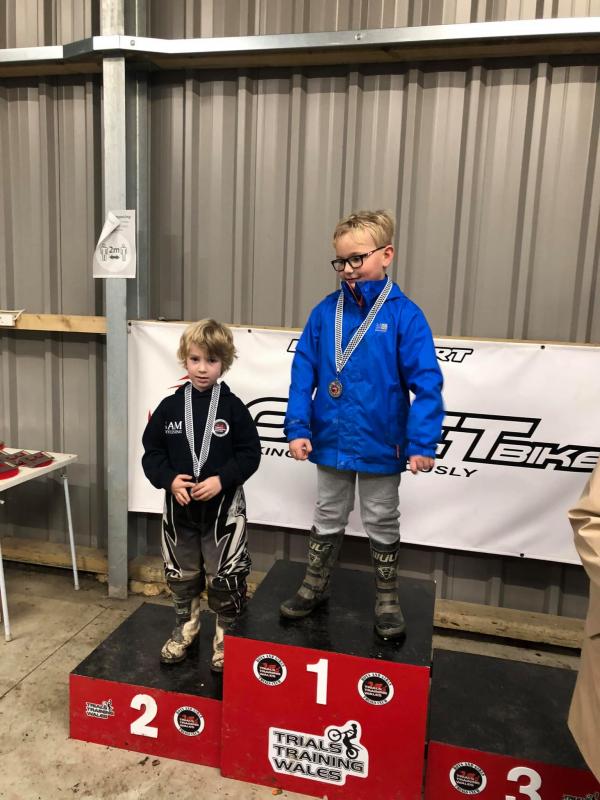 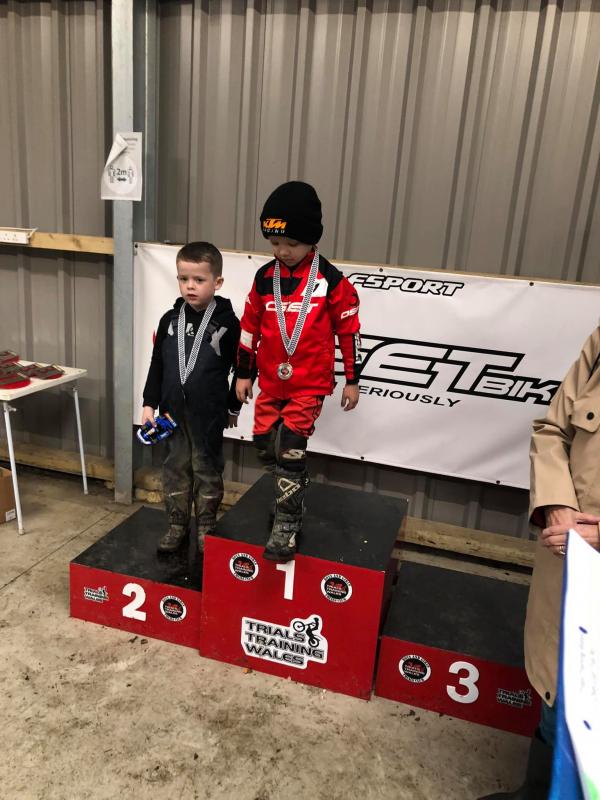 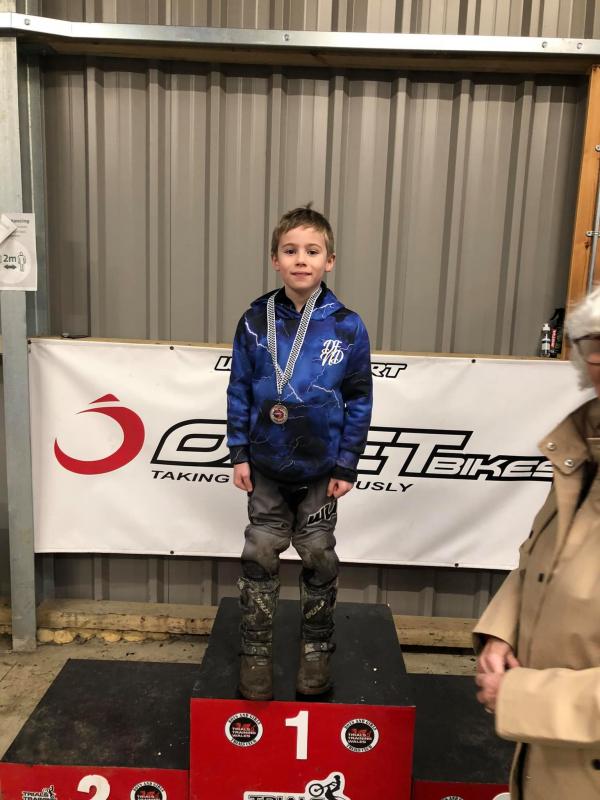 That concludes the results for the 2021 South and West Wales OSET Cup Championship.
Presentations were held following the final round, with a fantastic buffet organised by Jonathan and
Alyson Morris. 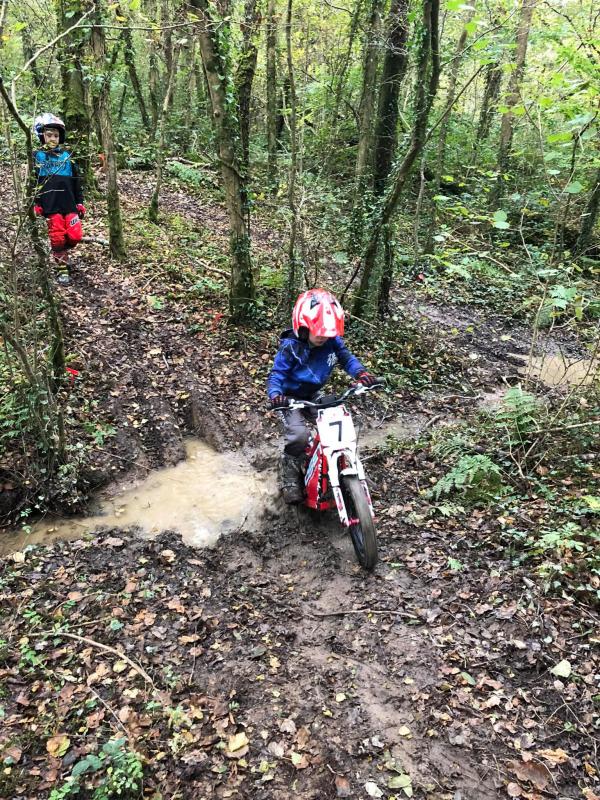 It has been extremely rewarding to see the rate in which the youths have improved, such so that
they started in their correct route in round 1 and by round 3 its fair to say most were more than
capable of riding up a route. Even more so has been the friendships made and the massive smiles
witnessed, watching the kids do what they love.
Hopefully next year we can attract even more youth riders to compete in the South & West Wales
OSET Cup and show the youth trials talent that South Wales has to offer, spread the word.
A massive thank you to Steve Garner & family at Trydan Off Road for use of the great facility and
plotting some great sections. Bryan and all at TTW for organising and of course, all observers for
giving up their time. Particularly the parents who sacrificed watching their own kids to observe, I
know how tough that can be!
Above all, a massive thank you to the parents for their time, dedication, bike maintenance and without you the kids would not be able to ride.